Next Up at WEPG:
St. Louis Premiere of
Lucas Hnath’s
The Christians

It is a dogmatic paradox that is as old as Christianity itself:  If God is truly benevolent and loving, how can God condemn most of his children to eternal damnation?

That is what Pastor Paul, leader of a successful and prosperous mega-church, was pondering when a missionary told him the story of a brave boy who died a hero when he rushed into a burning building to rescue his sister.  What a shame, the missionary told Pastor Paul, that this good boy’s soul would burn in hell because he hadn’t been “saved.”

And then, Pastor Paul had an epiphany.  He realized that the missionary was mistaken, and that a benevolent God could never condemn such a soul to hell, because…..

But that’s getting a little ahead of the story of Lucas Hnath’s The Christians, opening December 2 and playing through December 11 at the Union Avenue Christian Church, 733 Union Boulevard in the Central West End.  For now, let’s just say that when Pastor Paul brings the good news of his divine revelation to his congregants their reaction is not as joyous as Pastor Paul had hoped.  In fact, he discovers, he has ignited a doctrinal wildfire that just might destroy the congregation.

Hnath, a minister’s son raised in the Assemblies of God church, has skillfully crafted a play that examines great issues of faith, community and religion without judging or taking sides.  As New York Times theatre critic Charles Isherwood noted, “none of the characters are depicted as being fanatical, hypocritical or lacking in intelligence, which is too often the case when pious Christians are depicted onstage.  Mr. Hnath grants his characters the dignity of sincere belief, even as his play raises probing questions about how and why religion can be a divisive, if not abusive, social force.”   Hnath is very careful to provide none of the answers to those questions; he leaves that to the audience to decide.

WEPG will present The Christians in seven performances at 8 p.m. Thursday (second week only), Fridays and Saturdays and 2 p.m. Sundays.  The play is set mostly in Pastor Paul’s church and for this play, for the first time in its 40+ years of residency at UACC, West End Players will present it performances in the church sanctuary, rather than in the theatre downstairs.  Tickets for all performances are now on sale at www.WestEndPlayers.org/tickets. 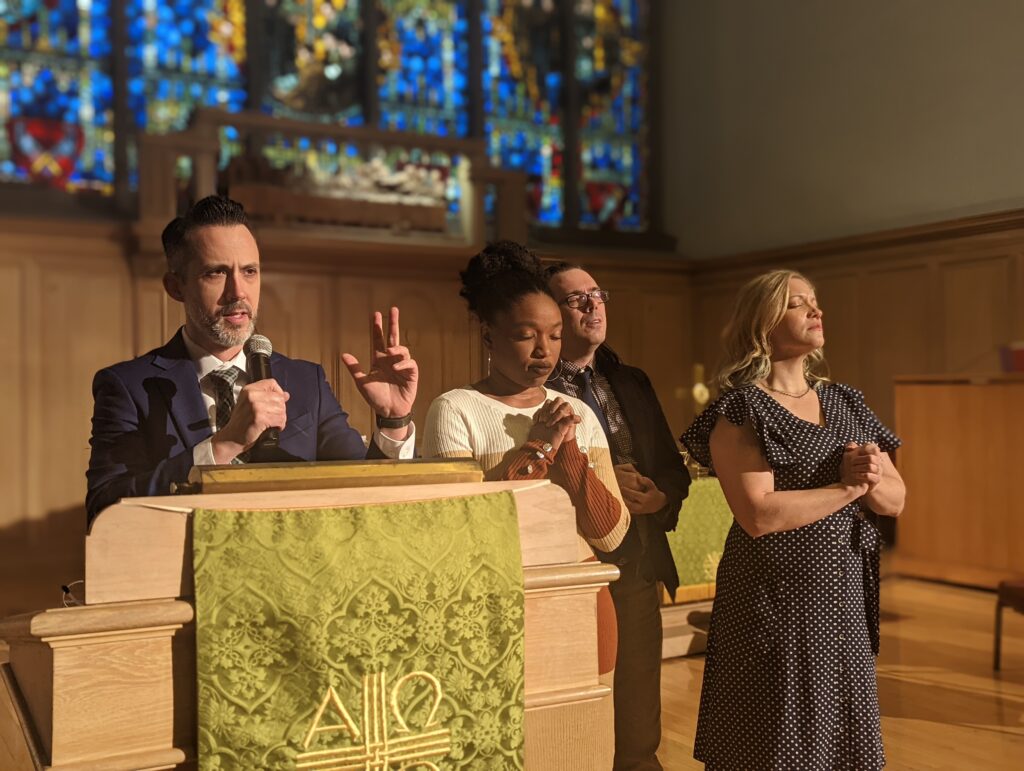 Pastor Paul (Joel Moses, L) is leading a prayer for his congregation, including Church member Jenny (Chrissie Watkins, LC), associate pastor Joshua (Joseph Garner) and the Pastor’s wife Elizabeth (Rachel Hanks).  None of them know that the Pastor is about to toss a doctrinal hand grenade from his pulpit.  He thinks it will be good news, but soon will realize that it could destroy not only his congregation, but also his career.  A scene from the West End Players Guild production of Lucas Hnath’s The Christians, on stage December 2-11 at the Union Avenue Christian Church.  (Ellie Schwetye photo)

Tickets for all shows now on sale

Season tickets as well as individual tickets for all four of this season’s shows are now on sale on-line.  Whether you want season tickets (your best value) or individuals tickets, all you have to do is click here.

The theatre is wheelchair accessible.